Pablo obtained his degree at the School of Law of Universidad Católica Argentina. In May 2000 he obtained a Master in Law (LL.M) at Fordham Law School in New York with a focus on IP & IT matters. Mr. Palazzi is admitted to practice law in Argentina and in New York. Before being a lawyer Mr. Palazzi was a computer programmer.
He joined Allende & Brea in 2008 to work in the Intellectual Property department. Before that, he worked as an associate at Morrison & Foester LLP in New York and was also a law clerk in the Supreme Court of Argentina and a legal counsel in the Ministry of Economy. He is partner of Allende & Brea since January 2012.
Mr. Palazzi has provided clients advise on matters related to intellectual property and internet law including data protection. His clients includes several Internet companies, social networks, online payment systems, hardware and software manufacturers, and online retail companies. He has broad experience in trademark and patent prosecution, intellectual property litigation, domain name dispute resolution and also in national and transnational e-discovery.
Mr. Palazzi has written the following books in Spanish: International transfer of personal data to Latin America (Ad Hoc, 2003), Data Protetion Law (Errepar, 2005), Credit Reporting Law (Astrea, 2008), Unfair Competition Law (Heliasta, 2014) and Computer Crimes (Delitos informáticos, Abeledo, 2016, 3rd edition).
He is also the author of the following articles: “Comparative Advertising in Argentine Law” published in Fordham Intellectual Property and Media Law Journal in 2012; “Copyright complaint against YouTube dismissed in Argentina”, published in the Journal of Intellectual Property Law & Practice n. 9, 2012; “Argentine courts validates GI ‘La Rioja Argentina’ against challenge from Spain”, published in the Journal of Intellectual Property Law & Practice n. 8, 2013; “Lack of provisional protection for patents applications in Argentina and interpretation of experimental use”, published in the Journal of Intellectual Property Law Practice Vol. 9, No. 11, 2014; and several law review articles dealing with the protection of ideas, software and other issues related to copyright and trademark use on the Internet and domain names issues.
Mr. Palazzi is also a member of AMCHAM, MARQUES CopyRight Team, INTA and GRUR. He is a WIPO panelist and he is also in the list of arbitration for film and media of the WIPO Arbitration Center. At INTA he is a member of the Emerging Issues Committee. At AMCHAM he is a member of the Intellectual Property committee and the Internet committee.
He was a member of the Data Privacy Advisory Group of the United Nations, a group dedicated to engage in a continuous dialogue on critical topics related to data protection and privacy with the objective of unearthing precedents, good practices, and strengthen the overall understanding of how privacy protected analysis of big data can contribute to sustainable development. He is also a member of the International Advisory Board of Privacy International and member of the editorial board of the International Data Protection Law Review.
Pablo is an adjunct professor at the School of law of Universidad de San Andrés focusing on courses in IP law and Internet law. Mr. Palazzi is a member of the editorial board of International Data Privacy Law (Oxford), member of the International Advisory Board of Privacy International and founder of the Latin American Data Protection Law Review and member of the Committe of CPDP LatAm.
He has been cited as a leading practitioner in Intellectual Property law by, among others, Chambers & Partners Latin America, The Legal 500 Latin America and Latin Lawyer 250. 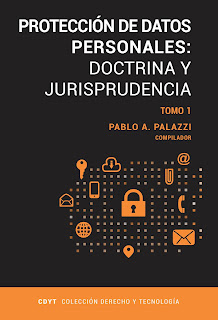